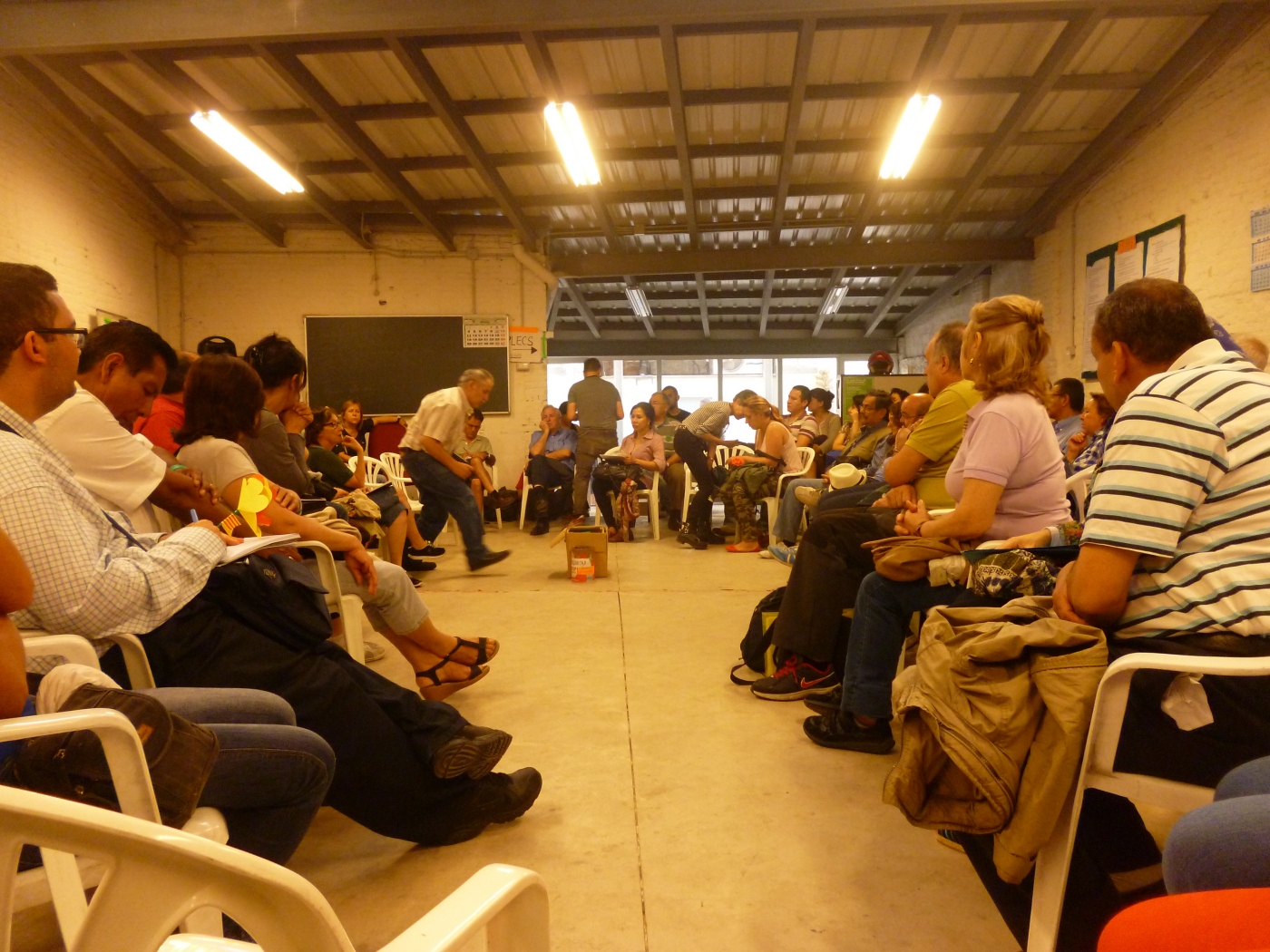 In February 2009, after the Spanish government had shown itself incapable of enforcing Article 47 of the Spanish Constitution – declaring that “all Spaniards have the right to enjoy decent and adequate housing” – a citizens’ assembly was held in Barcelona to establish the Platform for People Affected by Mortgages, or the PAH (Spanish: Plataforma de Afectados por la Hipoteca); a social movement which would not wait for neither government action nor market corrections for this right to be enforced. Its immediate aims are simple – the prevention of the systematic eviction of tens of thousands of debtors across Spain – but its larger dream is bolder: the achievement of the socio-economic conditions in which the human right to housing may be secure.

It is the ceaseless energy of this grass-roots platform, its repertoire of organising tactics, and its ability to bring disaffected and disadvantaged people together which has made its name so popular amongst Spain’s mass of indignados and so feared by its minority class of bankers, developers and investors whose interests are secured by the casta suits of the governing PP and the opposition PSOE; or the PPSOE, as one PAH organiser put it. And it is this movement of people which we in the international left should look to for both inspiration and instruction in the fight against the Age of Austerity. And it is for this reason that this article has been written; to paint us a portrait of the PAH and to give us a glimpse at how it operates – how it feels, how it looks, how it speaks – in its oldest branch of Barcelona.

Most people’s first encounter with the PAH will be through its weekly Welcome Assemblies held in Barcelona’s tightly-knit barrio of Hostafrancs, where upon entry you’ll be greeted with a friendly smile and, if you’re a first-timer to the meetings, you’ll be given a paper rose made with a Catalan flag tied to its stem. As you adjust to the sweaty heat generated from the  80 or so people squashed into the PAH HQ, all waving their hand-held fans to keep the heat at bay, you might notice that a good deal of the participants and a large majority of the organisers are women. On a letter printed and placed onto the doors of the assembly hall a PAH participant thanks her new friends for providing the warmth and love that only a mother knows, for helping her to help herself and then to help others, for bringing dignity and hope back into her life. These are the elements – dignity, respect, mutual-aid – which define a Welcoming Assembly, and are seen by the PAH to be absolutely integral in the participants struggle to reclaim their right to housing. Tears are not uncommon in these assemblies, especially when the veterans are invited to stand up to tell the newer participants of a recent victory they’ve had: their stories are always moving, the responses always touching, and you see that the PAH really is a family, a place where the pain and gain of one is felt by all. For those most in need of emotional support there is a smaller closed assembly where people may come to tell their story in an open environment of mutual respect and listening, where people may come to see that others are experiencing and feeling the very same as they do, where they can see that the guilt is not theirs, that they can still hold their heads high.

If the heart of the PAH is the Welcoming Assembly, than the head must be its Actions and Coordinating Assembly, which meets once a week to keep the gears of the movement oiled. But before this assembly even begins to discuss the host of actions the movement has in gestation it must decide on the day-to-day responsibilities of the attendees; everyone present is asked to contribute to one small but essential part of the PAH – one pair to help out with cleaning, another to update the calendar, someone else to record minutes, another to keep track of time while someone else moderates – and all are rotated every week. For anyone schooled in more bureaucratic forms of social and political groups this process – which is as true of the more routine tasks as those duties with more responsibility – may seem tedious and unimportant, but it is of course the process which matters here; the process of participation, of mutual support, of self-organisation and self-initiative which define the PAH as an organisation where everyone has a role to play, where everybody leads and where none are left behind.

Once into gear the assembly can cover much ground, and within a couple of hours of one particular meeting the group had already discussed three major campaigns. First was the Citizens’ Legislative Initiative, or the ILP, a major joint campaign between the Barcelona PAH, the Alliance Against Energy Poverty and the Observatory for Economic, Social and Cultural Rights, which has gathered around 140,000 signatures in Catalonia calling for emergency measures to combat the social crisis created by mortgage evictions and cut-offs of energy and utilities. The ILP seeks to use a mechanism of the Catalan parliament which allows citizens proposals to be voted on by the parliament, and which requires 50,000 signatures to be effective, meaning that the Barcelona ILP has nearly tripled the required amount of petitioners. The ILP – which uses the hashtag #JoAmbILPHabitage – will be voted on by the end of July, proposed five measures which could stem the flow of around 50 families per day from their houses to the streets or to precarious housing. They demand that any remaining debt of the evictees be liquidated, allowing them a second chance to rebuild their lives. They demand that empty apartments held by banks be used as emergency housing for evictees, while for those facing eviction they demand the right to a ‘social rent’ which means that indebted homeowners may pay only what they can pay, and that cut-offs of water, gas and electricity must end immediately, with the state stepping in to assure access if the companies cannot respect the rights of their customers. If the ILP passes parliament this July, the PAH and its social partners will have scored a truly enormous victory for thousands and thousands of families across Catalonia.

It will be an important victory because the PAH knows that their fight is one which must also confront the myriad of factors that compound Spain’s housing crisis: the squeeze of rising energy bills arriving in the mail from private utility companies (‘monstrous’ organisations, as one PAH organiser described them), the cuts in healthcare and education which have accompanied cuts in wages and conditions, while the explosion of ‘flexible’ contracts means that credit is impossible to access for many and which means that every rental payment might be their last. What’s more, this crisis exists in a global context where international investment and financial companies like Blackstone (see the video #BlackstoneEvicts) and Goldman Sachs buy up tens of thousands of empty apartments at heavily discounted prices from banks. One of the largest deals secured by Blackstone involved some 40,000 apartments in Catalonia alone with a real value somewhere near 6.4 billion euros, which were purchased for the sum of 3.6 billion euros: if the banks can give Blackstone a discount, the PAH asks, then why can’t they give the people one? This is why the PAH has begun organising alliances with similar movements in the UK, the US and soon perhaps in Brazil, where the Movement of Workers without Roofs are facing the same investment banking foes as in Spain. The fight being fought from Barcelona’s barrios, from London’s New Era Estate, from the US’s boroughs, from anywhere where “there’s a fight so hungry people can eat”, Tom Joad’s inheritors will be there.

But far away from the negotiations with the banks, from the political labyrinth of the Catalan parliament, from the long hard work of building national and international alliances, the bread and butter of the PAH remains the prevention of eviction and homelessness. When all efforts of the debtor fail, when all negotiations and offers are rejected, after lies are told and myths are spread to scare people into making strangling payments (that, for example, the debt may be paid by the children; that, for instance, a migrant might be forced to return to their home country for a failed mortgage), then the PAH’s Obra Social (Social Work) will step in to ensure that the family will not end up on the street, sleeping, perhaps like so many thousands of others in Barcelona, in the ATM vestibules of the very banks that evicted them. The Obra Social is the body which, when the bank is not prepared to find alternative housing for the tenant, when there is no room at anyone’s inn, is the body which will help the evicted family occupy one of the thousands of empty apartments owned by the banks. But to say that the banks actually ‘own’ these empty flats is, as one PAH organiser said, entirely misleading, for it was the Spanish people who bailed-out these banks during the crisis, and it is therefore the Spanish people who own these properties. Or as one of the PAH’s protest slogans says: the government bails out banks, the PAH bails out people. Here the shibboleth of private property becomes particularly naked and grotesque when, as in Spain, you have one of Europe’s greatest number of empty apartments and its greatest rate of evictions. Can we imagine a world where this does not occur, where human rights finally come to trump contractual rights? Can we do it, can we win? Of course we can, Sí Se Puede!

To learn more of the PAH, the documentary Seven Days with the PAH (Siete Días en la PAH), is available (with English subtitles) here, and you can download the book Vidas Hipotecadas (in Spanish) here.