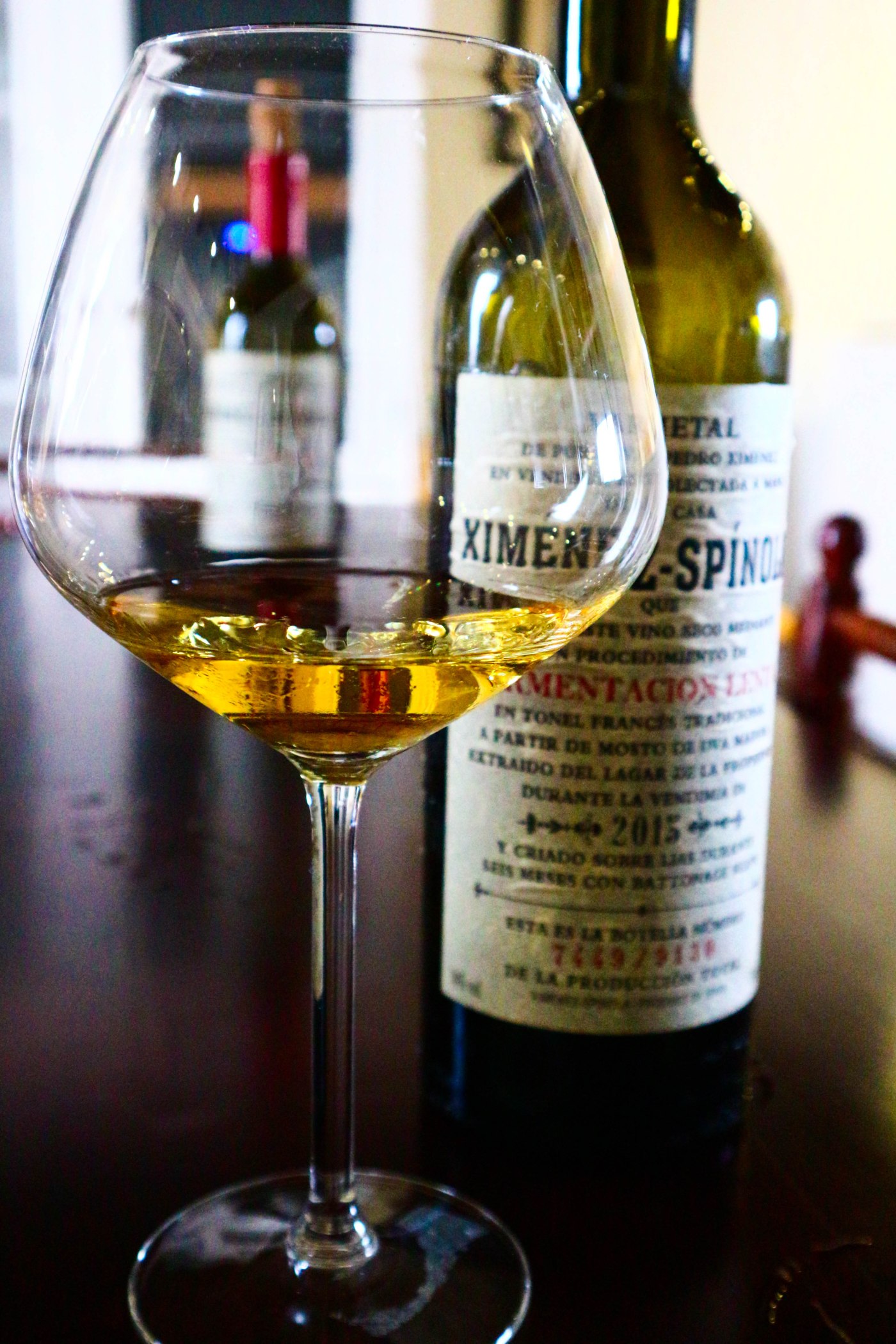 Tradition is an invaluable body of thought and practise refined, perfected, and revised over generations, inherited by the young from the old. But tradition can be both a blessing and a burden, and habit can limit the imagination. To think freely you need to break out of old rhythms, try new things, experiment. This is the beauty of both the new world and the old; mastery of the old ways, the genius of the new. But what happens when old world origins meets new world thinking? To find out, I investigate at Ximénez-Spínola Vineyards, one of the oldest wine producers of Jerez de la Frontera, one of the youngest at heart.

Close your eyes and imagine in your hands a glass of Pedro Ximénez. What do you see, feel, what do you taste? A deep dark brown, near black, wine, perhaps. Viscous, liquefied sultanas. Were you to close your eyes again and under your nose I place a glass of Ximénez-Spínola Fermentación Lenta, well, you would never guess that it was a Pedro Ximénez with its honey suckle aromas, its golden glow and corpulent body. Do the same with Spínola’s Exceptional Harvest, with its peach aromas and even deeper golden hue, with its almost sticky skin on your mouth, and you’ll be equally surprised to be told it was a Pedro.

The winemaker, José Antonio Zarazana, takes pride in your surprise. When the man explained to me the process and thinking behind these white Pedros, it made sense: why must Pedro Ximénez have to be the dark, syrupy-sweet wine that it is commonly thought to be?  There is no reason, of course, only that that’s the way it’s been done since the beginning.  Perhaps the real question is why winemakers feel they have to add extra sugar and extra alcohol to a perfectly good wine? José Antonio, the embodiment of the old world wine– urbane, articulate, impeccably mannered – asks himself “why should I, how can I, settle with that?”  And as much as the man respects and reveres the Jerez name, he doesn’t seem to mind that his wines –unfortified table wines all of them – aren’t allowed to carry the Jerez–Xérès–Sherry  denomination label. He’s happy with the label as it is, just as it was nearly three-hundred years ago.

“In Jerez” José Antonio tells me, “we live with our backs to the vineyard.” Focus and fame is on the bodegas, where the alchemy of the wine takes place. But the pago – that is the terroir in another tongue – the sun, soil, and salts of the earth are often enterrado: enearthed, buried. José Antonio wants to return the vineyard to its prime place in the winemaking process; by making wines with an individuality reflecting not just their bodega nurturing but their nature. Even their brandies – normally homogenised through the distillation process and given character mainly in the crianza maturation process – reflect the roots of their Jerezano soil. Unlike most brandies which are distilled from foreign grapes – the airén grape from the Castilian region in most cases – these brandies are pure Pedro distillations; the slight sweetness gives it away. “No one”, the viticulturist declares, “distils brandy in Jerez.” No one except this maverick.

José Antonio has an important point to make: tradition need not mean conformity, maturation doesn’t have to disguise origin, and fortification? It doesn’t even have to be. The wines of Jerez are already fantastically diverse wines, but the Ximénez-Spínola line-up of one-hundred percent PX non-fortified wines proves that there is still room for experimentation, diversification, and evolution, even in a winery which began making wine as early as 1729.

Want to learn more about sherry?

If you’d like to read more articles like this one, you can subscribe to the blog in the section to the right, or check out other articles under the Sherry Series tab in the menu.