“In the south, we need to touch” – this is how the Spanish tradition of Semana Santa was explained to me by Manuel, council representative of Defensión brotherhood, a religious association which for over fifty years has participated in the Holy Week processions of Jerez de la Frontera, Spain. Commemorating the final days of Christ, the Semana Santa is an assault on your eyes and ears, and a jig-saw puzzle for your head. 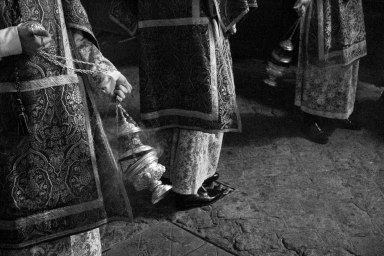 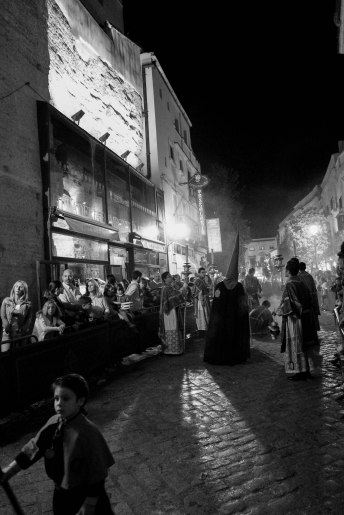 Burnt into your retina will be all the images of the passions and pains of Catholicism: a bloodied Christ, a distraught mother Mary, the whips and taunts of Roman soldiers, the lifeless bodies of the thieves hung up in the sun. For a week all these parade past you on enormous floats carried by enormous men.

The distant images from a Catholic childhood, those paintings of the Stations of the Cross, come to near-life in life-size figures of Christ and the Virgin. Behind these floats march countless, anonymous penitentes, who with their pointed caps – called capriotes – seek penitence.

The tradition has its roots entwined in both the inquisition, in which the accused were forced to wear the fool’s cap as humiliation, and the longer tradition of self-flagellation, in which believers flog themselves to seek forgiveness for sins. For the newly-baptised in southern Spanish culture, these faceless, formless figures provoke unease at first and last sight.

But more than this, what will move you is the music. Played in exaltation or commiseration, to a victorious tune or on a darker note, the music of the marching bands in-tow is spectacular. The horns, snare drums, big drums, clarinets; you’ll want them all closer, louder.

But, lo, the music will occasionally stop, allowing the men underneath the floats, or the pasos in Spanish, to catch a breather and to swap with the other team members on the bench. Returning to the march, or better put, the crawl, the men release a harmonized heave – huuvvh! – the crowd applauds, the music rises, and the pasos are back on their way. 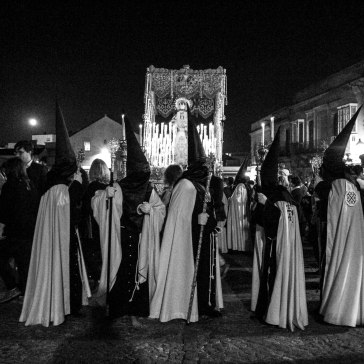 Through the night the pasos slowly sway their way street by street, corner by corner, to the Cathedral. Along the way, onlookers reach out to touch the gold-leafed floats. They raise to their lips the rosary or the Virgin around their necks. They trace out their body’s invisible cross with their fingers, their wide-eyes fixed on the Virgin’s sad ones, and I remember what my cultural guide, Manu, told me: “In the south, we need to touch”. In front of them the penitents walk bare-foot through the streets, the soles of their feet feeling the warm wax dropping from the candlesticks they and crucifixes they carry. Pain, perhaps, they want to feel; passion.

Or is it piousness they want to show? “In Jerez…” a friend of mine explains, “we are more Papist than the Pope.” In Jerez, another laments, the Semana Santa is for many not so such about spirituality as it is about sociality: a southern form of keeping up with appearances. For non-believers, the Semana Santa is an opportune-time to flee the city and enjoy a week on the beach. For others, it is an anachronistic expression of old Spain, epitomised, for example, in the tradition of Malaga in which the brotherhoods elect a jailed prisoner to be freed from prison. This year, the brotherhoods there made an unfortunate choice, picking an ex-employee of a public company who had defrauded the state of some 355,000 euros. Their proposal was rejected by the town council for fear of igniting a public backlash in these times of heightened hatred toward corruption, and thus the tradition was cancelled for the first time in 258 years. 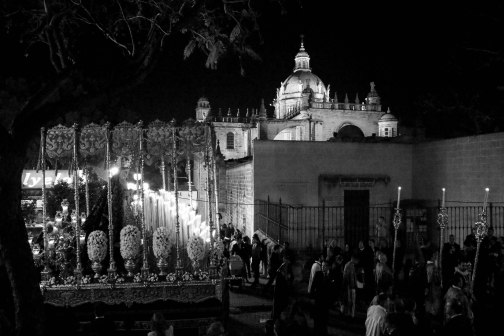 Probably, the Semana Santa is all of the above – an inexplicable mix of historical cultural evolution, social context, and spiritual sincerity. Anacronistic? Of course it is, but so is anything in our sterile post-modernity that is beautiful, unique, or moving.

Take a look the article Contemporary Traditions in Malaga for more.

You can also see more photo essays like this one in the photography section.