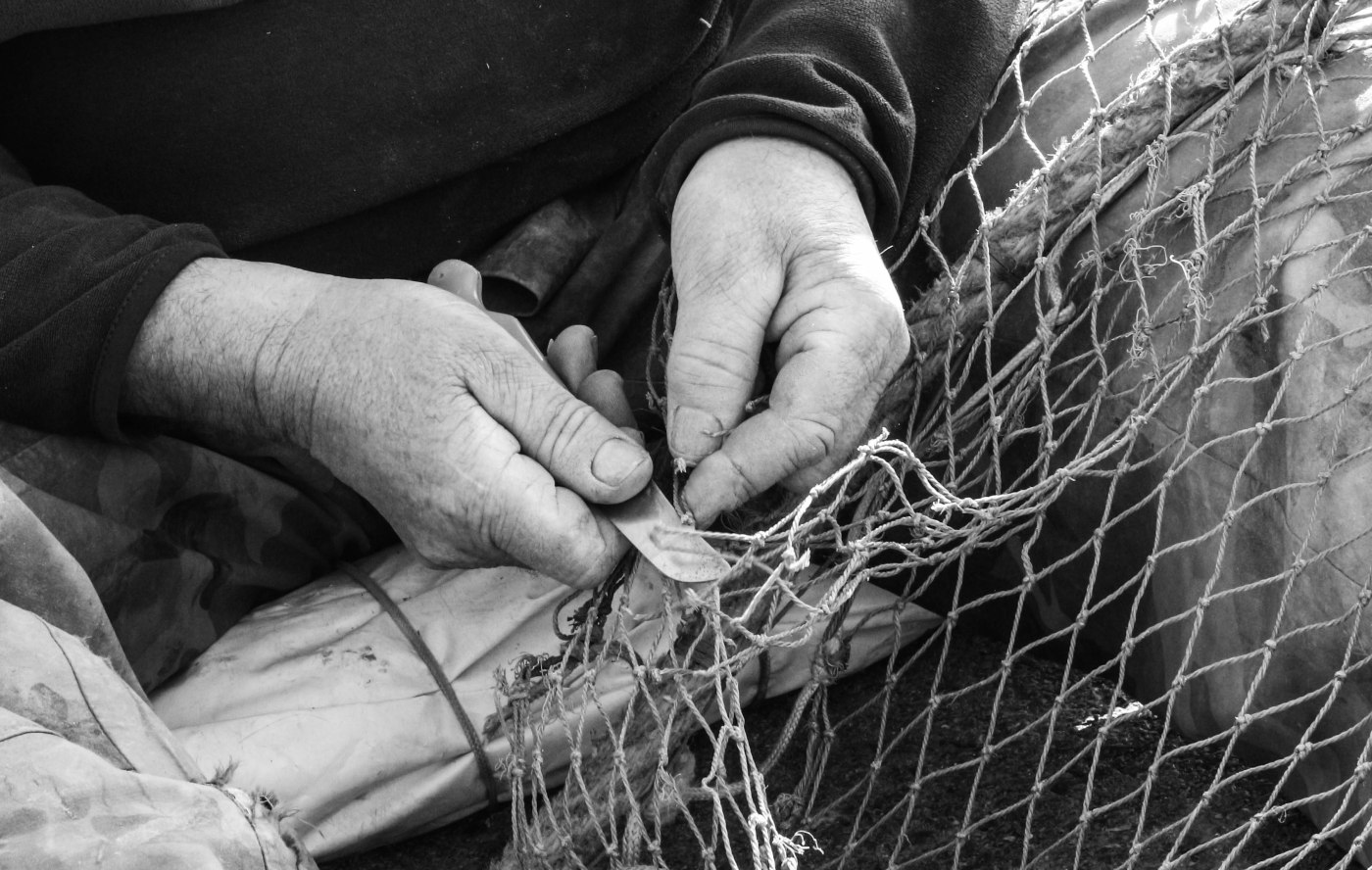 The Río Guadalquivir in Spain’s south is the artery that flows through the corazón heart of Andalucía, ebbing through Córdoba and Sevilla before spilling out into the lungs of the Doñana wetlands. At the river’s mouth lies Sanlúcar de Barrameda, a town famed for its manzanilla wining and its seafood dining. Wanting to experience these two essential ingredients of Sanlúcar, I went to the source of it all: the marinero district of Bonanza, home of men who spend more time at sea than at land.

I arrive to the port when the sun is warm and the blood flows languidly. Most people are at home enjoying lunch, but some remain at port, mending boats or merely ambling by watching those who mend boats. 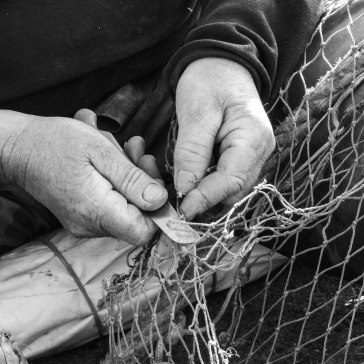 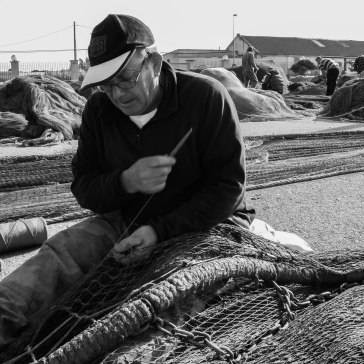 The rederos, too, are at work on the fishing nets, fixing holes and picking out sticks while the boats are out at sea or out of action. Their work is slow in the sun; the men sit down in their net and work hole-by-hole with a little knife through the enormous nets. One of them, Manuel, has been sewing these nets for over thirteen years. Now fifty-seven, Manuel is ready to put down his pocket knife for good, but he worries that, as older folks leave the trade, less and less young ones will fill their holes. “Cada vez hay menos” he repeats – there’s less and less each year in this generational craft. He explains that young kids have a hard time learning the trade. “It’s a shame”, he says, “because this is an art that you can never perfect: there’s always something new to find”. The sun begins to incline and I wander on while the rederos remain seated. So long as they remain, their profession stays alive. 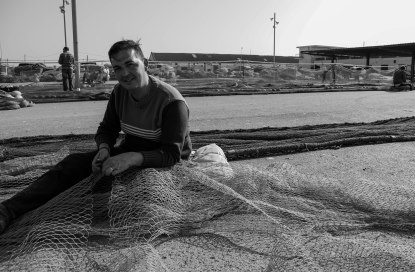 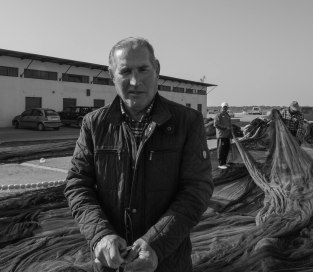 Outside the port’s gates there is a place called La Campana, which proudly but realistically claims it is “probably one of the best kitchens in the province”. After enjoying a grilled tuna steak with almond sauce, some pepper merluza and choco al pan frito, I can confirm that La Campana may very well be one of the best restaurants in town. Sanlúcar, without this rich culinary culture, would be both financially and spiritually poorer. The plethora of seafood restaurants bring in countless tourists each year from all over Spain, most of them wanting to sample the langostinos, a type of prawn with vivid blue streaks fanning out in its tail. The langostinos can earn fishermen up to thirty-five euros a kilo, but the value added to the town through tourism and trade is incalculable. The Fishermen’s Guild estimates that for every off-shore job in the fishing industry, another three are generated on terra firma. 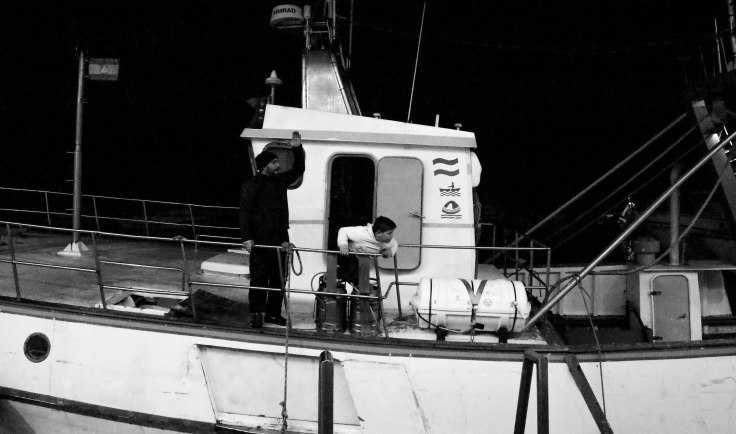 When these riches are brought to shore the port becomes the nucleus of energy in the Bonanza barrio. I stand on the cantil (the unloading platform) as the boats return. Tobacco smoke stings my eyes and gasoline fills my nose as tray-upon-tray of catch is handed over by the fishermen to the port workers. Every night, tonnes of seafood are unloaded onto a conveyor belt which travels through a crowded auction room of punters who are buying fresh seafood for their restaurants, market stalls and grocery stores. The whole gamut of sanluceño seafood is up for grabs: juicy pulpo, white clear merluza, sea insect galeras, alien-like choco and pricey white prawns. The men sit and watch, waiting to catch a bargain or a select kilo of the finest. When what they want appears on the conveyor belt and on the screen, they click a little button and the goods are theirs to take. The next day Sanlúcar will once again enjoy plate upon plate of fried fish with a bottle upon bottle of manzanilla, brought to them on ice, fresh from the auction. 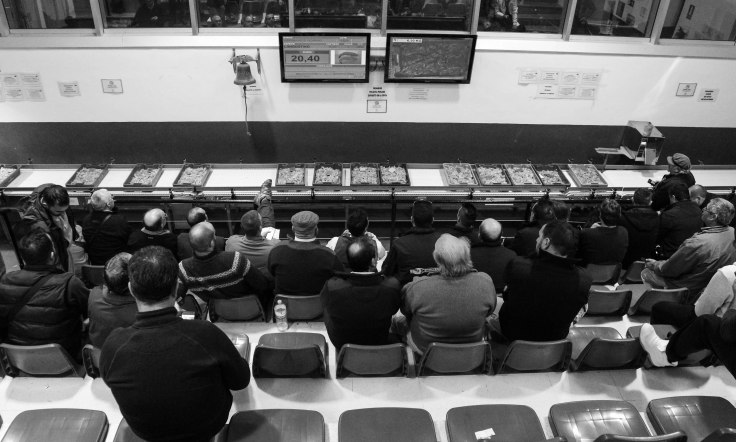 Tourists who pass through the town and sample its cuisine in some sunny plaza may not appreciate the immense industry invested and effort expended behind-the-scenes. If you take the time to talk to those who work there, and manage to get a behind-the-scenes look at the trades that sustain the life of the town– be it fishing, viticulture, husbandry or artistry – you will learn far more than you could otherwise. 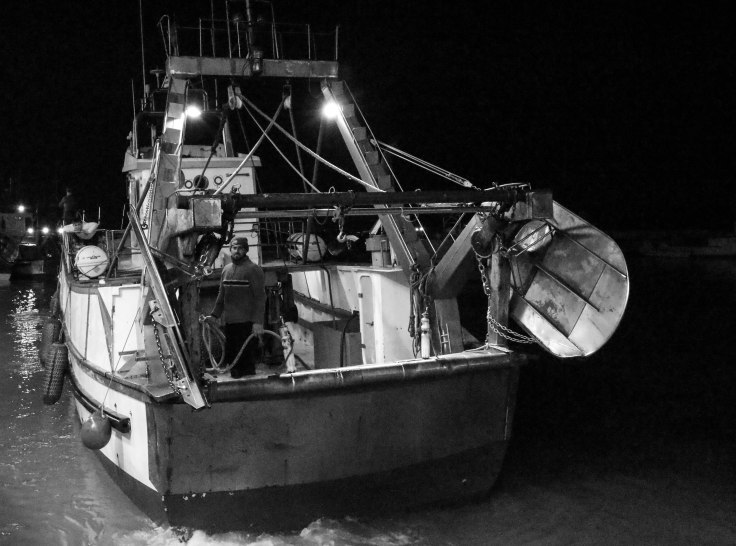 I learnt that few ordinary men would freely elect to go into the fishing game.  As a one of them told me, a fisherman is born into his profession. And if he is not born into it, he is only there out of sheer necessity. Forty-two years on the water has made this one a peaceful man. His face, framed with a thick set of glasses and a flat cap, is not as weather-beaten as you might expect. Supervising the unloading of the day’s haul he tells me that, despite the intense working conditions and long hours (fifteen-nineteen hours at sea every day – an improvement on the one hundred and twenty hours that used to be spent at sea every week) he has always loved fishing. As a three-year-old boy he dreamt of the sea; of fishing; of someday being a Captain. Sixty years later he no longer works on his boat but he still daydreams the same dreams and doesn’t like to be away from the sea for more than a few days at a time. 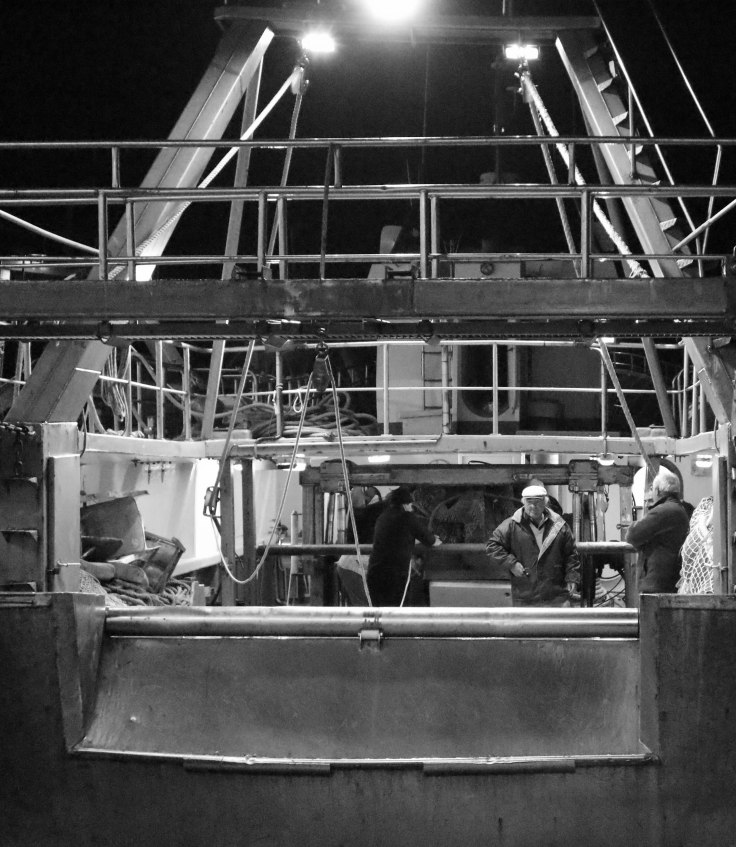 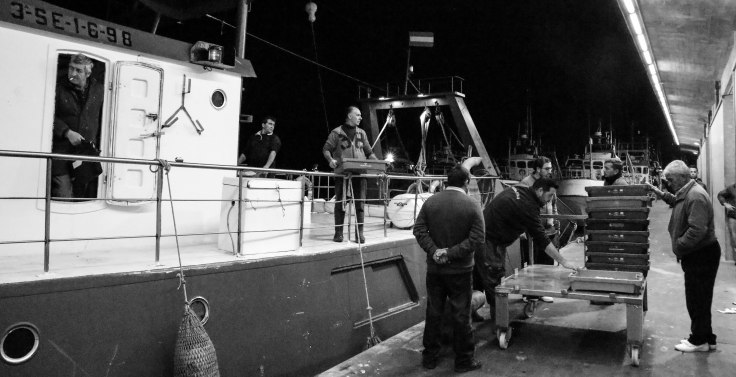 My original objective was to board a fishing boat, but because of a public holiday I could not do this. Despite this, my journey was successful because I achieved what I had really come here to achieve; to simply talk, listen, observe and learn a little about the lives of these people.

This feature was first published in the Slow Travel Magazine

If you enjoyed this feature, let me know what you thought. What are your thoughts on the idea of Slow Travel; have you ever tried slowing down your own trips from the usual hurried toing and froing of modern tourism?

One thought on “The Fishermen of Sanlúcar de Barrameda (Feature)” 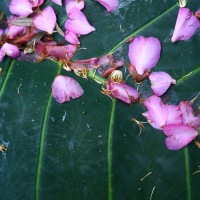 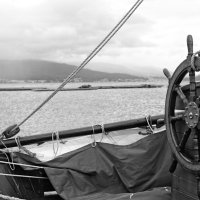 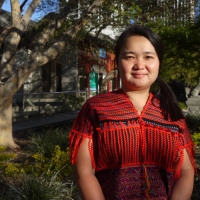